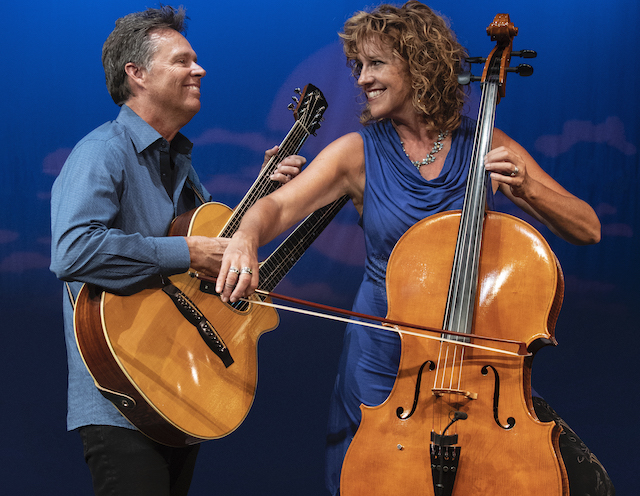 Date:
Friday, September 10, 2021
Time:
7:00PM
Venue:
Lawn Concert
Price:
$20 :: Masks Required
Status:
Tickets on Sale now - Please Call the Venue
Details:
Reserved Tickets for the Lawn are available with dinner reservations only :::: There is a $20 minimum in food and beverage purchases per person with your dinner reservation :: Seating will be limited and socially distanced :: You MUST call venue (828-575-2737) to make a dinner reservation and purchase your tickets. :::: If the weather is inclement - the concert will move to the Main Stage.

​Joe Scott and Hannah Alkire are a tour-de-force of acoustic music, described as “Superb Musicianship” by the News Reporter, Washington, GA!

Hannah studied with Gabriel Magyar of the Hungarian String Quartet, and was classically trained.

Hannah took the cello seriously from the start, and played in her school orchestra with her sister Sabina, bluegrass great ​Alison Krauss​ and Alison’s brother, ​Viktor Krauss​. She decided early on to keep the cello her passion but not go to music school, although she continued to study and play seriously.

By the time Joe was 14, his dad suggested he take up the 5-string banjo. So instead of learning the latest Led Zeppelin and Beatles songs, he immersed himself in ​Bill Monroe​, Lester Flat, and ​Earl Scruggs​. Joe excelled on the banjo, and won many contests at regional bluegrass festivals by the age of 16. Over the next several years, he was involved in various folk, bluegrass and rock groups based in the Colorado area.

Come enjoy an evening of live music, food and drinks on the Isis Music Hall Lawn. Reservations are highly recommended.