Brother and The Hayes with Ashley Heath

Brother (David Bingaman) and The Hayes (Jennie Hayes Kurtz) are siblings hailing from North Texas. Their love of the blues, country music, and bluegrass is the perfect vehicle for their playful and honest, story-driven songwriting. Jennie Hayes and David’s unique voices blend to form that classic blood harmony while maintaining their own character and strength. Their duets call to mind artists like Gram Parsons and Emmylou Harris and it’s easy to hear the influence of Doc Watson, Guy Clark, and John Prine in their songwriting. The two are greatly inspired by the power of place whether that be the suburbs of Dallas, Texas or a creekside in Chattanooga, Tennessee. 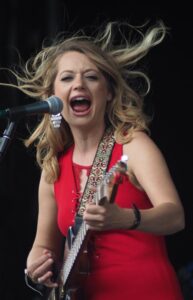 With a voice often described as “velvet soul,” Asheville songwriter Ashley Heath has been winning over the hearts of Americana music lovers since she gave up her barista apron on March 1, 2015. Currently had been touring in support of her sophomore album “Where Hope Never Dies,” Heath continues to deliver her signature blend of sultry blues and anthemic rock n’ roll arrangements to clubs and festivals nationwide.