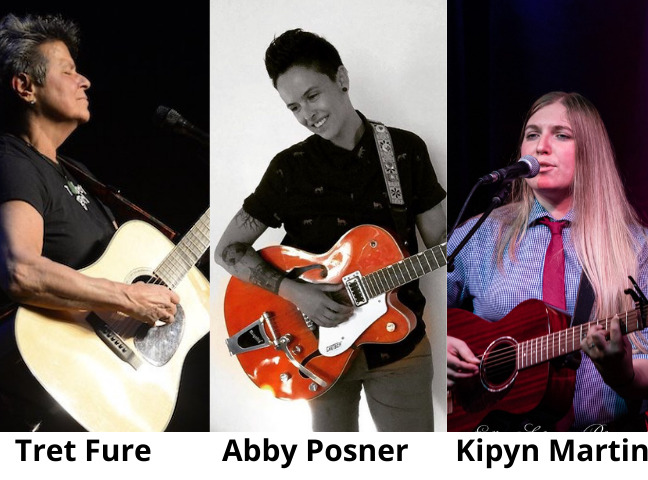 Date:
Friday, June 4, 2021
Time:
8:00PM
Venue:
Live Stream
Price:
ticketed- sliding scale $15-$50
Status:
Live Streaming Event
Details:
Live Streaming event - Donations requested for the artist. This event will be streamed live on Zoom and ticketed on TicketSpice. You will receive a confirmation and access code to the concert upon purchasing your ticket.

Live Streaming event – Donations requested for the artist. This event will be streamed live on Zoom and ticketed on TicketSpice. You will receive a confirmation and access code to the concert upon purchasing your ticket.

To Celebrate Pride month of June we bring together three outstanding singer songwriters in a virtual showcase streamed on the Zoom platform. The concert is in partnership with our Mountain Spirit Acoustic Series and several other music venues and hosts around the country.

Tret Fure’s award winning career spans over 48 years, including such honors as winning the South Florida Folk Festival Singer/Songwriter Competition in 2 out of 3 categories, the prestigious Jane Schliessman Award for Outstanding Contributions to Women’s Music, the Janine C Rae Award for her work in Women’s Music, and the “Pride In The Arts Favorite Female/Lesbian Musician”. Last year Tret took second place in the “Musicians United To Protect Bristol Bay” song contest with her song “The Fishermen of Bristol Bay” from her 15th CD “Rembrandt Afternoons”. Her song “Freedom” from the same album has been arranged for choir and is being performed in numerous choruses and choirs across the country. In addition to concerts, Fure also performs special music and “Sermon as Song” in UU and other churches across the country. She markets of her own line of clothing named after her popular song “Tomboy girl” and, while not on the road, Tret teaches guitar and songwriting individually and in workshop settings.  (Tret Fure Video)

Abby Posner has been a working musician in Los Angeles for the past 16 years. She is best known for her ability to play nearly any instrument that she can lay her hands on, twisting genres, and pushing the boundaries of folk and roots music. You also may have spotted her playing drums, mandolin, or bass while using her looping pedal. In addition to her versatility, she puts passion and soul into everything she plays.

This CalArts music graduate has composed music for commercials/TV, films, and radio shows all over the globe (including Old Fashioned, The Fosters, This American Life, The Art of More, and Last Tango in Halifax just to name a few). She also has music placed in commercials and TV shows all over China, Sweden, The UK, and Australia. Posner appeared in two episodes of GLEE on season four playing banjo and guitar, and the Freeform show Famous In Love playing banjo. (Abby Posner Video)

Kipyn Martin is an Indie Folk singer-songwriter whose roots sink deep into the banks of the Shenandoah River. She currently plays festivals, concert halls, coffeehouses, and house concerts from New England to Texas.
Kipyn celebrated several milestones in 2018 including the release of Dance Across the Sky, a new solo project following up her debut Undercover Muse, and winning the coveted Gold Award in the Mid-Atlantic Song Contest (Open category) for God is Love, her third MASC Gold adding to previous wins in 2013 and 2014.
Additional accolades for Kipyn include being honored by the Washington Area Music Association with their WAMMIE Award for New Artist of the Year in 2015 and multiple nominations the following year for Songwriter of the Year and Folk Contemporary Vocalist.

Kipyn also tours the country with Allison Shapira in the duo show Joan & Joni, a tribute to the music of Joan Baez and Joni Mitchell. (Kipyn Martin Video)