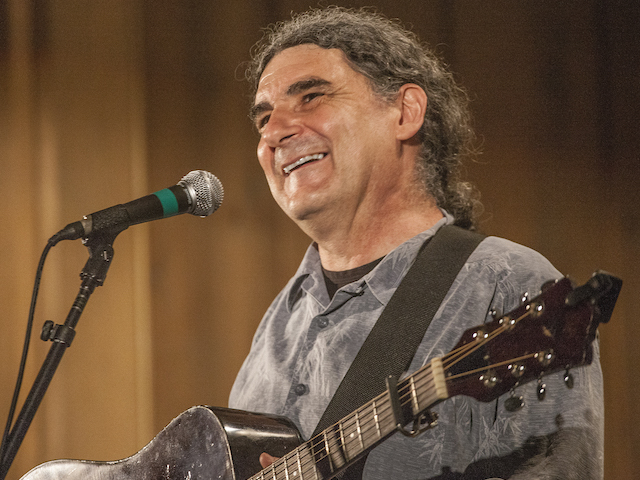 This show is by donation – please support this artist! The show will be streamed live to youtube from zoom.
To view the show on YouTube please go to​ ​Don White You Tube at 7 p.m. on Thursday, July 2.

If you want to be in the interactive Zoom concert use this access information.

There is no one-word description for what Don White does. He’s an award-winning singer/songwriter, a comedian, an author, and a storyteller. He’s been bringing audiences to laughter and tears for thirty years, released ten CDs, three live DVDs, and a book, ​Memoirs of a CStudent.​ For more information about Don’s work, please check out the videos and music here: www.donwhite.net​.

Don’s approach to music is a weird, unique blend. If he just played folk music, it would be a handy label. But he has invented his own genre with a mix of humor and powerful songwriting. White’s arc as a writer and performer has taken him from his industrial hometown of Lynn, Ma across the country as hitchhiker, through Boston’s comedy clubs and coffeehouses, and onto the stage with greats like Christine Lavin, Arlo Guthrie, Taj Mahal, Ritchie Havens, Patty Larkin, Bill Morrissey, Tom Rush, and Louden Wainright III. At every point, White has been the ultimate observer, infusing his work with his experiences as a husband, a father, a seeker, and a joker. White guesses he wrote his first songs sometime when he was eight years old, tunes he could hum or sing in his head. “I remember writing songs when I was a little, little kid,” he says, “kneeling down to say my prayers and then jumping in bed and showing my mom a song I wrote. I was born with the disease.”

Unquestionably, White is an odd fit in any medium. The folk world doesn’t know what to do with a guy this funny and sometimes sarcastic. The comedy world is suspicious of sentimentality. The one place no one questions what he does is onstage, where he can reach any audience. “I really don’t know anything else. But it comes with some liabilities. A lot of people who are funny and play guitar really fall under ‘novelty act.’ And I don’t really care for that myself. Parodies and things like that. I don’t find it entertaining. The serious folk world, they don’t embrace it. You have to find your audience.”

This show is by donation- please support the artist and share the event.