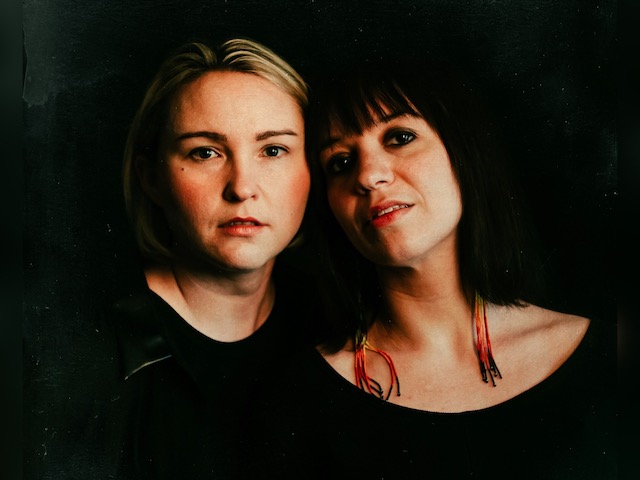 King Margo is Lucciana Costa and Rachel Coats, who grew up 40 minutes apart but didn’t meet until many years later in the middle of a Kentucky field.

Lucciana grew up in Ann Arbor, Michigan. She discovered the dobro at 12 years old, aer she heard “Give It Up Or Let Me Go” by the Dixie Chicks on country radio. She became instantly enamored with the instrument, which led to her playing in several local bands throughout her teens.

Rachel also cut her teeth on the local gig scene in Toledo, Ohio with her musically inclined family. An upright bass player since middle school, Rachel continued on to play in several orchestras and earned a Music Education degree from Bowling Green State University.

Both women spent their twenties building a steady rotation of live shows, studio work and a gun-for-hire reputation as multi-instrumentalists. Rachel was selected to play with several international touring artists in the folk-pop realm on bass and vocals. Lucciana focused on songwriting and composition, spending half a decade in Los Angeles honing her cra and scoring documentaries and commercials. Eventually Lucciana and Rachel found themselves in Nashville, both hired for the same touring band where they met for the first time. They connected instantly, both musically and personally, and the seeds for what would eventually become King Margo were planted.

King Margo hit the road almost immediately, thanks to the girls’ love of travel and their inclination to book shows across the country to hang out with friends and family (and to fund several snowboarding trips). Scrappy gigs and long hours in a van helped solidify the humor and tone of their first album, Barely Gettin By, which was self-recorded and successfully crowdfunded by fans they’d picked up along their travels. Their first album was pure fun, capturing the sarcasm and liveliness honed by playing in rowdy bars deep into the night.

For their second record, King Margo has matured into a more evolved sound. The songs are more personal. The arrangements are more intricate, featuring soaring harmonies that have captured listeners across the country. “She never boarded up the windows/Grandma likes to say/She rode out every storm/Frying chicken just the same,”opens the song “Monsters,” inspired by a conversation overheard in a New Orleans coffee shop. There are songs of hurricanes, apocalyptic house parties, murderous beauties, love and heartbreak.

King Margo is ready for a beer in your town. If they’re not making music, they are rock climbing or snowboarding. They are disciples of living the good life, taking care of the people around you and being nicer to the planet. They want to see you somewhere out there soon.