Kuntala Ray: Quest for Immortal Music with Jay and Aditi 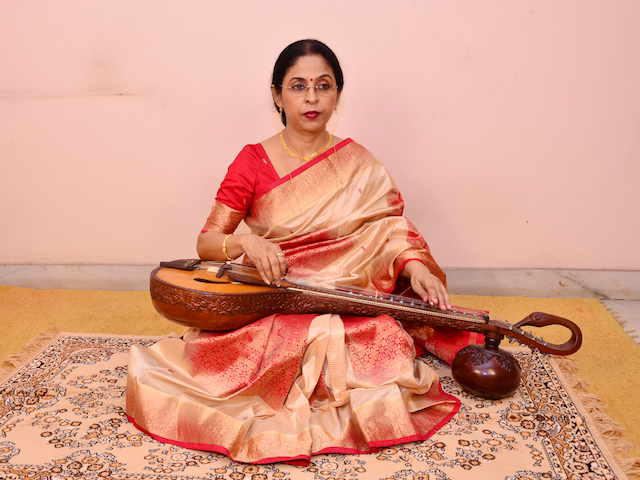 Date:
Wednesday, October 12, 2022
Time:
7:00PM
Venue:
Lounge
Price:
$20
Status:
Tickets on Sale now - Please Call the Venue at 828-575-2737
Details:
Reserved Tickets for the Lounge are available with dinner reservations only :::: There is a $20 minimum in food and beverage purchases per person with your dinner reservation :: Seating will be limited :: You MUST call venue (828-575-2737) to make a dinner reservation and purchase your tickets.

Kuntala Ray is one of the very few lady instrumentalists who plays Hansa Veena, a rare Indian classical instrument. Hansa Veena is designed and named by Sitar Maestro Pandit Ravi Shankar. She is equally efficient in Indian Slide guitar too. She hails from a family of musicians and inherited musical talent from her mother. She started her career in music in guitar under Sri Uttam Chakraborty, a renowned guitarist of Bengal.

Subsequently she switched over to Indian Classical music and opted Hansa Veena under the tutelage of Pandit Barun Kumar Pal, a senior disciple of Pandit Ravi Shankar. For further enrichment she became the disciple of Pandit Soumitra Lahiri, an eminent sitarist of India of “Vishnupur Gharana”. 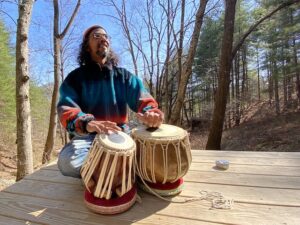 Kuntala will be joined by Jahidi on percussion. Jahidi is a musician and sound healer based in Asheville, North Carolina.  A former attorney, Jahidi left his legal career to follow the calling of the drums, founding Drumming for Wellness, Inc. in 2007 and speaking as a TEDx speaker at TEDxMiami in 2013.  As an accomplished drummer and tabla player, Jahidi has accompanied world class artists such as Deva Premal and Jowee Omicil.  He is also the creator of a sound healing method called Rhythmic Resonance Healing. Jahidi’s mission is to empower, heal and unify people through rhythm and sound. 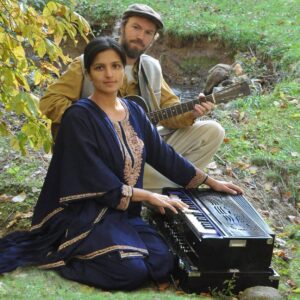 Jay and Aditi have been singing and performing since they were children. Aditi grew up learning devotional and folk Indian music from her grandparents from India and continued to accompany and perform with her father throughout her childhood. More recently, she has been studying Indian devotional and classical music with her guru, Krishna Kant Shukla, who lives in Varnasi, India. Jay grew up playing folk guitar with his parents and has continued to pursue a career in music as a singer-songwriter and roots musician. His musical interests carried him to Ghana where he studied African rhythms and singing and to India where he travelled with his wife, Aditi. They naturally pulled together their eclectic backgrounds to create an original sound when they formed the band, Shantavaani. Continuing on as “Aditi and Jay,” they deeply honor the traditions they’ve studied and hope that this convergence of musical traditions can facilitate not only entertainment but also enrichment for the soul.