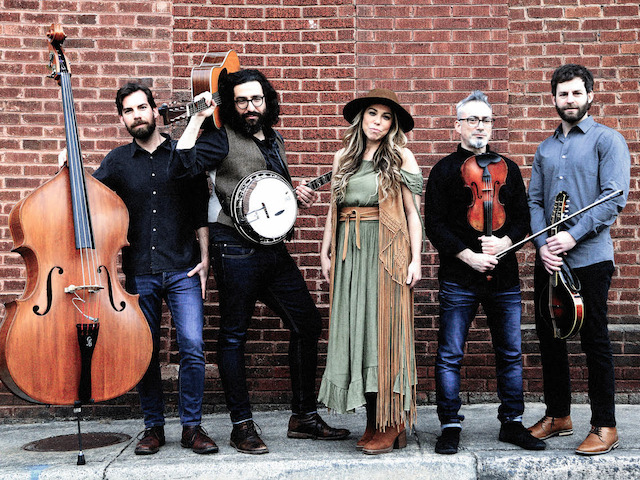 “What seems initially to be a curious novelty combining bluegrass and traditional Jewish music, turns out to be an idea that makes absolute sense…The union is a perfect fit… It took matchmakers Nefesh Mountain to get these two together, and we’re thankful they did.”

“A highly-effective blend of these two spheres… only rarely have we heard a prominent Jewish counterpoint to the gospel music that has been a part of bluegrass since Bill Monroe’s earliest recordings.”

Yes, Beneath the Open Sky is a bluegrass album.

Yes, some of its lyrics are sung in Hebrew.

No, it isn’t a gimmick or a parody. And, no, it’s not klezmer music.

Now that we’ve got that straight, let’s hear Beneath the Open Sky for what it really is: a soulful, euphoric, folk-flavored outpouring of hope and joy, propelled by the kind of crisp, crystalline picking that gives lyrics wings. It’s a distinctively Nefesh Mountain sound.

Beneath the Open Sky was very much a hands-on undertaking for Lindberg and Zasloff, writing or arranging all 11 songs, as well as co-producing the entire project from start to finish. They recorded it at the Sound Emporium, what has become their studio stomping grounds in Nashville with the instrumental backing of Sam Bush, Jerry Douglas, Tony Trischka and David Grier, aided by Nefesh Mountain’s touring band members, Alan Grubner on fiddle and Tim Kiah on bass. A dazzling picker in his own right, Lindberg provides lead guitar and banjo throughout, while Zasloff soars with some of the most melodic, incisive and soul-stirring vocals we’ve heard since Mary Travers first took the spotlight.

Using original material along with four tracks drawing from the folk and old time traditions, Lindberg and Zasloff ingeniously create a beautiful arc throughout Beneath The Open Sky which defines their own genre and world as they see it. The album’s opener, “Bound For The Promised Land,” is a rousing call to action for universal equality. The other highly revamped traditional songs, “I Want To Hear Somebody Pray,” “Wild Mountain Thyme,” and “Kitchen Gal” are each invested with new insights, arrangements, and lyrics. Of the original compositions, “A Mighty Roar” urges us to savor the earth’s majestic melodies; “The Narrow Bridge” sings of human resilience even in “troubled times” such as our own; “Halleluyah” counsels us to “breathe in this world/with all of its wonders”; and “On and On (L’dor Vador)” offers the reassurance that the light in us shines on throughout the ages.

“Eretz’s Reel,” the album’s lone instrumental offering, is a heart-racing, fox and dogs chase with Lindberg’s sprinting banjo leading the pack. “Oseh Shalom,” sung largely in Hebrew, rings loud and passionately as a plea for peace and love. Lindberg and Zasloff close the album with Irving Berlin’s seldom-performed “Russian Lullaby,” a song Zasloff says is “very special” to her. “My grandmother Mildred, who was born in Poland, used to sing that song to my mother. And then my mother—every night—would sing it to me. It always meant so much to me because there’s something so sad and so hopeful, sweet and touching about it. It just felt the right way to end the album.”

Throughout these songs, you can hear the foundational similarities between bluegrass and Jewish traditions, notably the lure of “home,” the love of nature and the comforts of a like- minded community. Jerusalem Ridge, Rocky Top, Flint Hill and Nefesh Mountain are clearly parts of the same eternal chain.

Both native New Yorkers, Lindberg and Zasloff have long and strong ties to bluegrass. “I grew up in Brooklyn,” says Lindberg, “but my dad’s side of the family, which was not Jewish—he converted when he married my mother—lived in rural Georgia. I would go down and hang out with my uncles, who were great guitar players. We’d hike the Appalachian Trail and listen to old-time music. Something in my soul responded to those feelings I had when I was down South. In my early teenage years, I started being exposed to guys like Bela Fleck and then taking that and going really deep into Flatt & Scruggs, Bill Monroe and the Stanley Brothers.”

Zasloff says her musical preferences were the same. “I’ve always felt like a bit of a cowgirl. I’ve always been a free spirit—always musical and always drawn to country, bluegrass and folk. I feel it’s so pure and truthful and real. When I met Eric, it was like a match made in heaven.”

“When we sing in Hebrew,” Lindberg continues, “it’s us celebrating our heritage and history.” I’ve never felt a language barrier when I’m listening to West African or Celtic music. I was talking to Jerry Douglas about this, specifically about the “Transatlantic Sessions” that he leads over in Ireland and Scotland where many of the songs are sung in Irish or an ancient form of Gaelic. I felt so strongly connected to the music when listening to these beautiful songs and melodies, regardless of the language barrier, to the point where I myself felt a sense of closeness and belonging with these rich traditions of Scotland and Ireland.”

“We want to have a chance to share our story with everybody,” Zasloff adds. “There is this word ‘Americana’ that we all know well and is used a lot these days, bridging the gaps somewhere between Old-Time, Bluegrass, Folk, Blues, and Jazz which all have deep roots in this country. For me, the beauty of all of these forms of music is that at their core they are about people, they are about this amazing world, and they are about life. That is where we are coming from with Nefesh Mountain; somewhere in the long chain of music and ideology that gives us the opportunity to open people’s minds and hearts to our culture and heritage. We’re all in the same boat here. We’re all trying to figure it out.”