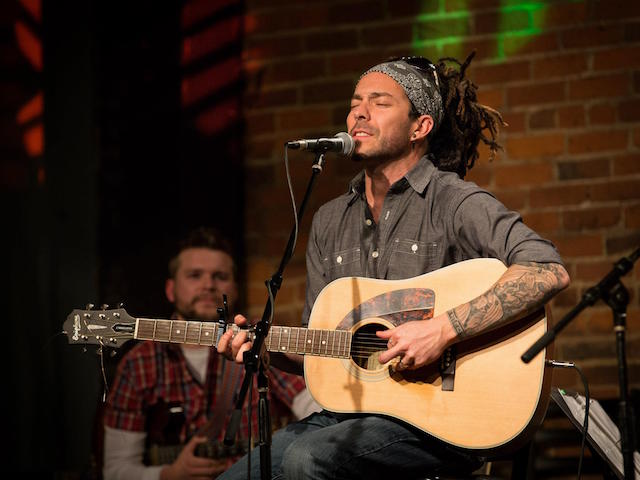 Having been described by Hall of Fame Songwriter Don Schlitz as, “Impossible to follow on stage”, Robinson brings his emotionally passionate, high energy acoustic show to an intimate lounge performance. His soulful power incorporates his raw NY roots with a Nashville style unique among those in his genre.

At the crossroads of Blues, Folk and Americana lies Robinson Treacher. Whether it be in the studio or in live performance, Robinson's emotionally dramatic songwriting style is matched only by his deeply passionate vocals. Steeped in what can only be labeled as a "traditional" songwriting format, Robinson has taken fibers from all genres...rock, country, R&B, and folk, and woven them into a distinct tapestry, one that is clearly distinguishable among others in the singer/songwriter genre. Born and raised in New York, his honesty and grit reflect the eclectic musical influences that have shaped everything from downstate New York City to the upstate Adirondacks. On the heels of his last release, "Porches", Robinson has released "Born", a purposefully "stripped down" collection of songs that rarely contains more than an acoustic guitar, an upright bass and of course those powerfully distinct vocals. Robinson has been featured on Sirius/XM’s "The Loft: Live from The Living Room" series and has shared the stage with such notable artists as Vince Gill, Iris Dement, Jorma Kaukonen, GE Smith, Joan Osborne, Tom Rush, Cheryl Wheeler, Amy Helm and Carrie Rodriguez. He has even been touted by legendary songwriter Don Schlitz ("Forever and Ever Amen", "When You Say Nothing At All", "The Gambler") as being, "...impossible to follow in concert."

Recently, Robinson won the 2018 IMA (Independent Music Award) for BEST EP Roots/Country/Singer Songwriter/Americana for his album “BORN”. He has been nominated for a Nashville Music City Award for his song "This Bar" as well as for an NSAI/CMT country music People's Choice Award and an Independent Music Award nomination for his song "Long Day Good Night". Aside from being a regular at Nashville’s famed Bluebird Café, he is a staple on the folk music touring scene, and has been a featured Showcase Performer at NERFA, the Falcon Ridge Folk Festival, Connecticut Folk Festival, New Jersey Folk Fest, Cape May Folk Fest, Key Largo Folk Fest and has been a two time recipient of the Audience’s Choice Award at Virginia’s famed Lyrics on the Lake Festival. Robinson has recently been spotlighted by the Rhode Island Songwriter's Association (RISA) along with the Philadelphia Songwriter's Project with award nominations as well and is currently supporting his latest release “Born” with shows in NYC, Nashville, and all points in between.