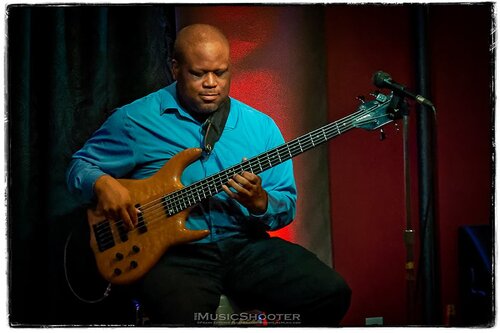 Bassist Shannon Hoover, from Greenville, SC will feature a special birthday tribute to the legendary Jaco Pastorius (Dec 1st, 1951-September 21, 1987)! The band will play original music by Jaco, Weather Report, and other collaborations.

Shannon released a CD entitled "Follow Me" in October 2012, featuring original compositions and has recorded with many other artists as a sideman. He has been busy the last few years building a foundation for jazz in Greenville, SC. Shannon is music director of a newly formed non- profit organization, the Greenville Jazz Collective, which he co-founded in 2012. The group promotes jazz awareness and education in the Greenville area, reaching out to local schools and the public with concerts, camps, and clinics.

Shannon has been working on several new recording projects, including a second studio album of original compositions, a solo electric bass album, and a bass method book. He also is music director for the Sharon Jones Tribute Band, Jaco Pastorius Tribute, along with a newly-formed Curtis Mayfield Tribute to the "Superfly" album featuring vocalist Datrian Johnson.