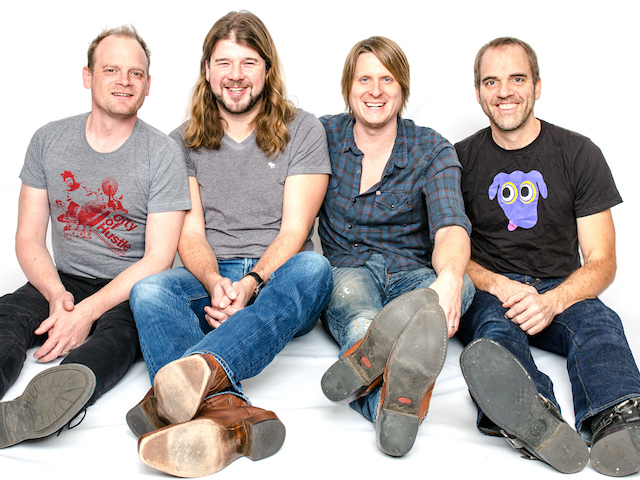 New Years Eve with Yarn and Josh Shilling performing an entire set of Yarn’s music along with selections from the The Band’s The Last Waltz.  Asheville’s Taylor Martin will open

Yarn’s ability to persevere ought to come as no great surprise, especially for a band that spent two years honing their chops during a Monday night residency at the famed Kenny’s Castaway in New York’s Greenwich Village. In effect, it allowed them to rehearse onstage, mostly in front of audiences that often ranged in size from five to a hundred people on any given night. Five studio albums followed — Yarn (2007), Empty Pockets (2008), Come On In (2010), Almost Home (2012) and Shine the Light On (2013). The band then took to the road, playing upwards of 170 shows a year and sharing stages with such superstars as Dwight Yoakam, Charlie Daniels, Marty Stuart, Allison Krauss, Leon Russell, Jim Lauderdale and The Lumineers. They performed at any number of prestigious venues — Mountain Stage, Daytrotter, the Orange Peel in Asheville, the Fox Theater in Boulder, the 9:30 Club in D.C, South by Southwest, the Strawberry Festival, Rhythm and Roots, Meadowgrass, Floydfest and more, eventually surpassing 1,000 shows, half a million miles and performances in nearly every state. They’ve driven nonstop, made countless radio station appearances, driven broken-down RVs and watched as their van caught fire.

They’ve paid their dues and then some, looking forward even as they were forced to glance behind.

Indeed, the accolades piled up quickly along the way. They have landed on the Grammy ballot 4 times, garnered nods from the Americana Music Association, placed top five on both Radio and Records and the AMA album charts, garnered airplay on Sirius FM, iTunes, Pandora, CNN, and CMT, and also accorded the “Download of the Day” from Rolling Stone. Shine the Light On found shared song writing credits with John Oates (the Oates of Hall & Oates fame), and when audiences expressed their admiration, it brought the band a populist following of diehard devotees, popularly known as “the Yarmy.”

Versatile singer/songwriter Josh Shilling boasts an impressive combination of experience and musicianship. Shilling's musical forays have been diverse and considerable, ranging from jazz and soul ensembles to Americana and contemporary country, jam-band, Bluegrass and folk projects.
A Martinsville, Virginia native, he began playing the piano at a mere 7 years old. As a child he matured into a skilled pianist and Hammond B3 player whose voracious musical study allowed him to authentically portray the style and feel needed for nearly all genres. Shilling also developed steadily as a guitarist, while honing his songwriting and natural emotional vocal ability, which has become his calling card.

As a teenager, Shilling fielded offers to tour nationally with professional bands, and at 17, he graduated high school one year early to begin his musical pursuits. He began traveling with successful regional groups and working as a session musician full-time. The deceptively junior new member stunned audiences with his soulful vocals and heartfelt performances. Subsequent gigs soon followed with nationally touring artists including Chicago's Bill Champlin, who proclaimed Shilling "has the potential to be one of the greats."

Esteemed trumpet and trombone player Mic Gillette also enlisted Shilling's services. Stints with members of group Tower of Power, along with crowd-pleasers The Embers, expanded his musical palate. His collaborations with Gillette prompted the revered musician to dub Shilling the "real deal." Continually perfecting his sound and delivery, he began to perform over 200 dates a year across the nation.

Mountain Heart's January 2007 appearance on the Grand Ole Opry introduced Shilling to an eagerly receptive crowd; after singing one of his original songs, he earned a standing ovation and encore that evening - a rarity and intoxicating distinction for any artist on that revered stage. Since that night, Shilling has played on the Opry over 50 times, shared the stage with Lynyrd Skynyrd during their 2008 summer tour, opened for artists like The Marshall Tucker Band, The Avett Brothers, Levon Helm, and many more. He’s also fronted or backed artists like The Lee Boys, Bryan White, The Traveling McCoury’s, Del McCoury, legendary guitarist Tony Rice and many more.
July 31, 2012 marked the official release of Shilling’s debut solo project Letting Go. After years of writing and recording for other acts, Shilling meticulously selected songs from his catalog and set out to produce and release a project of his own.

Now a full-time studio musician and songwriter in Nashville, Shilling continues to perform solo, with Mountain Heart, and make guest appearances with artists who inspire him. He embraces music in its totality: His fierce immersion in one genre is enhanced by his passion for the others.
While his career already includes performances on hundreds of albums, dozens of songs recorded by artists including Diamond Rio, Lee Ann Womack, The Infamous Stringdusters, Sierra Hull and Mountain Heart, Shilling continues to tour internationally and stay creative with hopes of a new solo project in the near future.